OK, so you got Christmas, the first night of Hanukkah, and Kwanzaa off. Break’s over kiddies, and school’s back in session. First item of business is a late Festivus, beginning with the traditional Airing of Grievances, otherwise known as the Worst of Cycling. Unit of measure for worstness is one Pavel, defined as the amount of frustration required to raise my systolic blood pressure 10mm of mercury. So, in no particular order, here is an abbreviated list (otherwise, we’d be here ’til Groundhog’s Day) of the Worst of the 2005 Pro Cycling season. 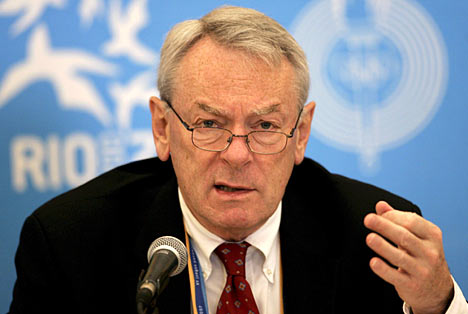 I’ve spent more time over the past 365 days wondering what the hell this guy’s problem is than I have thinking about sex. Well, ok, maybe not more than sex, but certainly more than beer, pizza and football combined. How can a man charged with bringing fairness to sport constantly spout off about how everyone is cheating and not get fired? “Drug use…within entire teams continues unabated”, “a third” of all hockey players are on steroids. Listening to the guy is like reading the headlines as you pass the Price Chopper checkout; I keep waiting for him to sound off on Keira Knightly’s plummeting weight. This tendency to accusation without merit is something problematic for all of…

The Anti-Doping “Movement”
2 Pavels
What’s the deal guys? What do you want? Ok, I get it. You think dopers suck. But why haven’t you had anything meaningful to say about the Heras positive? The first winner of a Grand Tour, the highest form of road cycling, loses his title to a dope positive, and you guys just run him out of town on a rail. No “good to see the system works”, no “this is a step in the right direction”, just a “yeah, I always knew that guy was on drugs” and on to next victim. You guys don’t want to clean up the sport, you just like being loud and dissenting. But saying all cyclists are on drugs is a dull cliche, almost as dull as the… 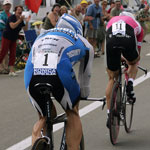 Yeah, sure, it had a few good moments: Vino’s win on the last day, Savoldelli’s tactical clinic on Stage 17, but for the most part it was dull, boring trash. Lance caught Jan on the first day and pretty much the GC race was over. When Disco didn’t hold the race together, T-Mobile, for no apparent reason, did. Rasmussen crashed all over himself in the final TT but still got to stand on the podium because of two good days in the Alps, and the Green Jersey competition was decided by a relatively innocuous headbutt three days into the race. Not exactly enough to get a cycling fan’s nipples hard, unless you’re…

(edit July 2021—with the benefit of 15 years’ hindsight, author would like to apologize for policing Elisa Basso’s body, even in jest.)
Elisa Basso
1 Pavel Look, I know it’s hot in July in France and all, but for crying out loud, woman, put on a brassiere if you’re gonna wear a white shirt. Save it for Eddy Mazzolini. The Tour is hard enough on the riders without you snapping their necks around, like…

Paolo Bettini
3 Pavels
I’m all for being a wily trickster of a rider. As Fausto Coppi said, “Age and treachery will defeat youth and skill.” But Paolo, man, when you get blatant about it and caught in the act, it’s poor form not to admit it. It is especially poor form to try and apologize for not doing anything, and extremely poor form to throw a prissy temper tantrum because you only get to make one podium appearance that day. If you’d been having a lousy Giro, it would almost be ok. But you had taken a brilliant win on Stage 1 and were the current race leader at the time of the incident; there’s no excuse for such jackassery, especially if you’re racing in…

The UCI ProTour
1 Pavel
I never really got the ProTour. Apparently, it was designed to get the best riders together more often, though Cycle Sport made an argument that it was just to classify one “best” rider for a given season. I think it’s pretty fair to say it failed in both those regards, (certainly Eurosport agrees with me on this) and I’d be way more upset about it, but it looks like the ProTour will be severely reduced, if not dead, come the ’06 season.

I skipped the segue this time to really drive home the point here. Ads are annoying. No one debates this. But I think people tend to overlook that this is how most cycling webpages and magazines pay the bills. Do you really think you can trust a product review when the product’s manufacturer is paying the reviewer’s rent? Certainly, Cyclingnews’ reluctance to get back to me on why a Zipp dealer employee wrote a review of a Zipp product (all they said was his name was left off the byline by mistake) is not encouraging. And CN is among the least blantant offenders. If you’ve ever been subjected to the limp-wristed trash that passes for product evaluation in Bicycling magazine, you’ll know what I’m talking about. Of course, some of you are bound to disagree, and you’ll probably do so by leaving… Now, it’s not the smack talk I’m decrying, here; I’ll admit right off that I’m the Chad Johnson of cycling news. But each time I run my yap, I leave myself open to criticism, and I’ve had to stand behind my accusations on a few occasions. But honestly, the problem isn’t so much accountability as confusion. I hate seeing like 50 different anonymous comments on a single post. Phil McCracken, Hugh Jass, Rodney Cockwell, Dick Pound; the world is full of humorous fake names you could use to differentiate yourself from the other three “anonymous” dudes posting on the site. This would allow me to address your concerns directly, rather than flailing about like King Kong on the Empire State Building. Of course, if you really want to express your discontent, swing by my house next Festivus, and we’ll settle the issue in the Feats of Strength.